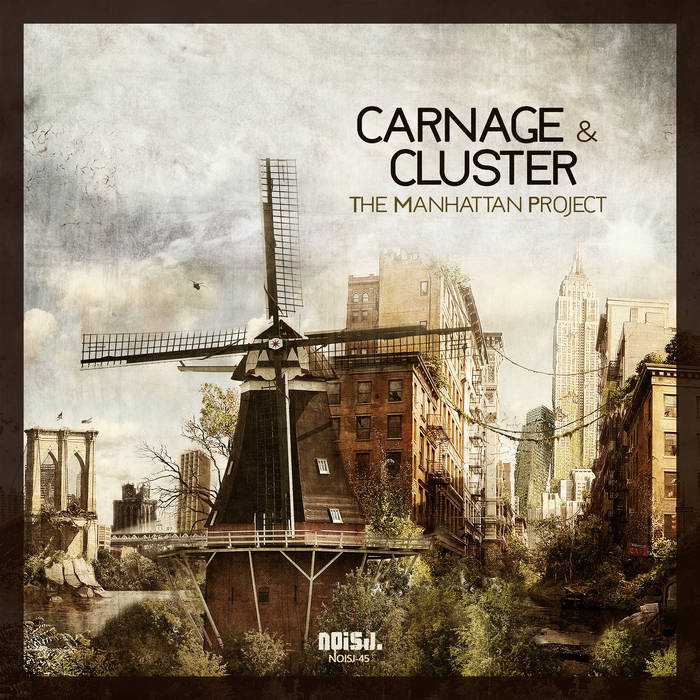 It’s a matter of common knowledge that the infamous Manhattan project was the USA’s endeavor to produce the atomic bomb for use in World War 2. In combination with the stunning cover artwork, it is clear that Carnage & Cluster use a political concept as background for their 4th (but 1st “proper”) album. Musically, it’s a tight-fisted, somehow genre-defying, yet totally coherent unity of 10 hardcore tracks with a strong experimental flavor.

Only the intro of “Democracy = Autocracy” seems a bit easier on the listener, before the rhythmic onslaught breaks through the atmospheric backdrop, “Worldwide Corruption” drops a blunt criticism at the political and bureaucratic establishment (and more punching beats), while “Puppet Masters” is midtempo, charged industrial style. Then “Oppressed Masses” and “World Riot” add some timeless 808 flavor, before the collaboration track “Rude Mechanicals” with The Relic even exceeds the previous tracks in harshness. Equally sturdy is Carnage & Cluster’s remix of a DJ Niel track, which fits in seamlessly here, and “A-Bomb”, “No World Order” and “Marching Out” show neither dwindling in force nor mercy with the faint of heart, propelling “The Manhattan Project” into rhythmic contortion.

“The Manhattan Project” is thus an album in its true sense, not a collection of tracks, but a breathtaking entity, political in its statement and progressive in sound – yet surely not the slightest bit pretentious. Clocking in at a classic 45 minutes, this is an album for the discerning listener to indulge in.

This text goes with the album. This explains the ideas behind the music!


We should be thankful to people like Assange, Snowden, Manning and groups like Anonymous. They are trying to make a difference in these times of terror, suppression and non-privacy.
Of course there are a lot of other people fighting for the good cause, trying to unmask "democracy" and showing its true face.

In the past the artists and bands did their part in this. Music spoke to an entire generation, telling them what was wrong with this world. Music gave people a voice, a chance to show to the world how they felt about events all over the world.

Where would we be without Bob Dylan, the ultimate writer of the protest song? Where would we be without Aviv Geffen, the only Israelian musician who doesn't get attacked and sued by the government for writing protest songs against the Israelian government? Where would we be without Pink Floyd's Dark Side Of The Moon, which told the story that millions of people were not able to tell.
Pink Floyd even took it up a notch with their album Animals, which even shocked an entire Punk generation. Punk bands like The Sex Pistols and The Ramones, who were speaking for a big group of anti-political kids, didn't want to go as far as Pink Floyd did with Animals. A direct attack on the British government. A very strong, dark and accurate album which exactly tells what was going on at that time.

And this particular album has influenced me a lot and guided me throughout the past years. Even though this album was released in '77 it is still relevant. Maybe even more than ever!!
Governments worldwide have created this so-called recession, to keep the masses down. People getting legally robbed by banks, their managers and, again, governments. And there's nothing we can do about it. Everybody who's attempting to stand up to this gets silenced.

As musicians, it's time to reclaim our position being the voice of a generation. Writing protest songs again, fighting for our freedom, spreading our discontentment with today's governments.
While I do not see myself as a musician, I do want to give a signal to the artists who are. Artists who used to give their opinion when nobody asked for it, artists who made statements through
their music, artists who had a story to tell.

Even though our music scene is relatively small, I believe we can make a difference. Every movement has to start somewhere. If the Punk generation was able to get heard by making non-mainstream, raw and unpolished music, why wouldn't this be possible for a big organized underground movement?